Recently, somehow water started leaking on the floor inside the cabin of my wife’s 2008 Toyota Highlander Hybrid Limited every time after it rained. Let’s take a look at how to find and eliminate the source of the water leak inside the car.

The source of the leak turned out to be missing rubber grommet hole plugs under the rear bumper. Water was flowing into the holes and collecting inside the frame of the car, eventually making its way into the cabin.  Let’s take a closer look at this issue and learn how to possibly fix it.

The same principle can also be applied when troubleshooting water leaks on other models of Toyota or Lexus cars, as they often share similar parts and frame design.

Finding the Source of the Water Leak

A water leak can cause corrosion or some serious damage to the electric system, and in my case to the hybrid battery located on the floor under the rear passenger seat. It can also cause mold and bad smell if the water stays on the carpet for too long.

Finding the source of the leak wasn’t very easy or intuitive. The problem was well hidden from plain sight. I’ve read a lot of forum threads where many other desperate Highlander owners were trying to pull their efforts together in the search for the clues. I tried many of their suggestions, like cleaning sunroof or AC condenser draining tubes, checking doors and roof racks insulation, door trim and windows weather moldings, etc., but nothing really worked for me. Months went by, and I kept dealing with wet carpets and kept checking online forums for the latest updates on this problem.

One day as I was digging deeper into Google’s search results, I found one comment stating that the source of the leak could be hiding under the rear bumper, but that thought didn’t really receive much attention on the website. At that point, I was willing to try anything (in Florida it rains every single day in summer…)

Removing the rear bumper cover was quite easy. You will need a Phillips screwdriver, a flat head screwdriver or fastener clip removal tool,  a ratchet, as well as 8 & 10 mm sockets. There will be two screws under the rear door, three more in the wheel wells on each side, and two screws holding each mudflap. In addition, there will be 5 more screws and 5 push-pin fasteners on the bottom of the bumper cover. Those screws and fasteners come in all sorts of shapes and sizes, so you may want to keep them organized or take notes where everything goes. 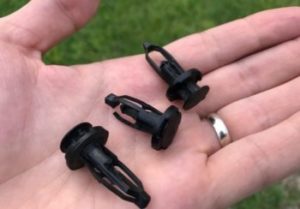 Also, you are likely going to break some of the push-pin fasteners as they become stuck from the road grime and snap very easily. You will need them to secure the bumper cover back in place. If you can’t reuse the old ones, you can find the replacements here. After all screws and fasteners have been removed, you are ready to remove the bumper cover. Start from one of the sides right above the wheel well and firmly pull the bumper cover away from the body. Keep pulling it off as you make your way around to the other side of the car.

You can also watch my video how to remove the rear bumper cover on 2008-2013 Toyota Highlander here:

Missing Pieces of the Puzzle

After removing the bumper cover take a look at three holes in the frame on each side covered with rubber caps. I noticed that in my car all three rubber plugs on the left side were missing. I wasn’t sure how those plugs went missing, nor could I find them anywhere inside the frame. The three plugs on the right side were still there.

I closed the rear door and tried to pour water on the roof of the car to see if it will leak inside those holes. Sure enough, a good amount of running water was flowing directly inside the holes. 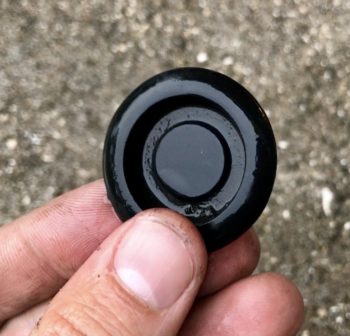 I found and ordered exact match new rubber plugs and covered the holes. After installing the new plugs I felt like a small amount of water can still get past them. For added security and to keep them from falling out next time, I also put a few layers of scotch tape over the plugs. You can find original Toyota replacement hole plus here (this is eBay affiliated link).

It’s been a few weeks now after I’ve fixed the leakage issue. Since then we haven’t had any water leaks in the car so far. I hope my example will help someone with fixing a similar problem. If that’s you, please let me know in the comments section below. Thanks for stopping by, and have a nice day!

Do you still have questions?

You can do it yourself! 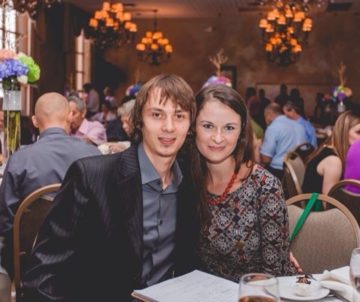 Hi, I’m Victor. I am an IT professional for a living. I also love fixing other stuff in the meantime: cars, computers, gadgets, appliances, etc.  On this website, I’m sharing my knowledge, experience, and useful tips. My goal is to show how easy it is to fix most things if you have the right tools and simple clear instructions. I hope to inspire you to fix things instead of throwing them away or paying money to get them fixed. Give it a try and you will feel great about your achievements, learn a new skill or two, and hopefully save lots of $$$ along the way.

All content provided on this website is intended for informational purposes only and cannot be held liable for any injury, damage, or problems that arise when trying to duplicate steps described here. Performing repairs on your car by yourself may void vehicle warranty. This information is provided “as is” without any representations or warranties and should not be treated as advice. All information is subject to change without notice at any time. This information is not guaranteed to be accurate. Do it at your own risk. Read more…

DIY-time is a participant in the Amazon Services LLC Associates Program, an affiliate advertising program designed to provide a means for sites to earn advertising fees by advertising and linking to amazon.com or myhabit.com. DIY-time also participates in affiliate programs with eBay, ShareASale, and other sites. DIY-time is compensated for referring traffic and business to these companies.